Is my baby ‘good’? Well there’s a question… 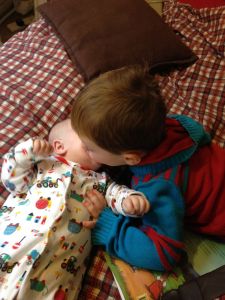 Lots of people at the moment come up to me, coo at the small creature-like baby in my arms and ask that most ridiculous of all questions – ‘is he good’?

I find it the most laughable question in the world. He’s 9 weeks old. He doesn’t know anything. He’s a bundle of need who has exceptionally cute smiles but he’s all about instinct right now. He’s pretty much a creature. He has no idea what it means to be good, I’m 36 years old and I think I’m only just starting to get an idea.

It might seem to make more sense to ask it of my toddler. Is he ‘good’? I’m not sure what that means either. He’s just learning that he has opinions and can control some of his world. He’s struggling to come to terms with the sad reality that he can’t get what he wants all the time. He expresses that loudly. He delights in the word ‘no’ and he stomps off, deliberately ignoring us. He sometimes listens and does what we say and that’s helpful for him not dying from running in front of a car or burning his hand in the toaster. You can look at him in the space of an hour and decide he’s the most kind helpful child who has ever lived or the most disobedient child in existence. He’s a toddler figuring out the world and I don’t think that makes him good or bad.

I grew up with a profound sense that I was ‘bad’. I was the rebellious younger sibling. I wrote many sorry notes to my parents to try and atone for my wrongs. I hated being ‘bad’. They didn’t give me that label. I think I took it on from who knows where (I’ll get some counselling soon don’t worry..). I now hate using the words ‘good’ and ‘bad’ with my boys. I don’t want them to think of themselves in those terms. I prefer to encourage more specific words like being kind, helpful, listening etc. ‘Good’ seems so vague, so linked to whether the they are doing what I want them to or not and I think we all know that the world isn’t made up of ‘good’ and ‘bad’ people. We are so much more beautifully complicated than that.

As a Christian I’m pretty firmly convinced we have a problem. A major problem. We aren’t born good or bad. We are all born beautiful ruins, insanely made in the image of our maker, immortal splendours (to borrow from CS Lewis). So much more glorious than the word ‘good’ could ever describe. We are capable of such beauty and care for each other. But we are also born in need of a radical change from darkness to light, from being people who naturally reject God to being people who are part of his family. From being people who are selfish and twisted to various degrees to ones able to live a life of sacrificial love. There is a whole lot more darkness in our hearts that we could ever imagine or want to. ‘Bad’ just doesn’t cut it. Here’s a nice video that sums it up better than my sleep deprived words ever could.

The issue isn’t one of how nice we are or aren’t. Lots of us are very ‘nice’ people. The issue lies in whether we accept the outstretched hand of our maker to come out of the cold and sit by his fireplace and learn what it really means to be ‘good’ as part of his family.

So no old lady on the bus, my son isn’t ‘good’. Nor is he ‘bad’. He’s a whole lot more complicated and simple than that. But I sense you are really asking ‘does he sleep all night?’. And no he doesn’t. He’s. A. Baby. He doesn’t do what I want him to. But that doesn’t mean he’s ‘bad’. When he has smiley happy moments he’s not being ‘good’ and when he wails he’s not being ‘bad’. Deal with it.

Your correspondent, sailing dangerously close to upsetting a whole load of people with this one. (Especially if we think about who it is that most wants us to be ‘good’ at this time of year… just how does Father Christmas work it out? Whose standards of ‘good’ is he calling us to anyway?)

2 Responses to Is my baby ‘good’? Well there’s a question…