It was love at first sight, the evening we drove up from London, two friends and I, escaping the noise and claustrophobia of summer in the city.

Up the M25, M40, M6, turning off at the A66 towards Keswick and then the winding road down past Derwent Water, up the Borrowdale Valley and onto the Honister Pass.

The sky grew silent and darkened.

The sharp walls of the valley reaching for the sky, silenced me in wonder.

Random sheep scattered everywhere made us laugh nervously, their alien forms a stark contrast to the urban landscape we had left behind.

Huge boulders littered the slopes, I slowed down, feeling remote, cut off, in another world.

We rounded the corner, driving along the shores of Buttermere, all around fells lined the sky.

Fells that soon I would know all the names of, Fleetwith Pike, Haystacks, Seat, High Stile, Red Pike, Robinson, for now unknown, unexplored, unfamiliar yet aching to be known.

I could not stop staring.

It was love at first sight.

It is hard to put into words the affect this lake and it’s surrounding watching hills has on my subconscious. The first time I came to Buttermere I spent hours staring at the fells out of the youth hostel window. There is something insanely profound about gazing on something which hasn’t been built by humans, which has been around for 100s of years, which has seen humans come and go for generations and yet has stayed pretty much the same. Nature changes in slow seeping ways, not in the quick fixes we seem to enjoy as we hop from one project to the next. Nature takes its time. Rivers run and run and the landscape morphs around them. Glaciers retreat and leave their deposits, giant rocks, rolling landscapes and sheer escarpments.

The analogies to life with God spring almost too easily to my lips, the unchanging immutable nature of the Divine, the way the mountains surround and protect. The experiences of the people of God journeying through mountain country to Jerusalem to worship at the temple are echoed in these Fells. I join in with them as they draw their own spiritual analogies from the hills around them. “Those who trust in the Lord are like Mount Zion, which cannot be shaken, but endures forever. As the mountains surround Jerusalem, so the Lord surrounds his people, both now and forevermore.”

After the initial wonder of my first encounter with Buttermere, it became a place where I could not escape the reality which runs through my fingers so often in my life back home. Here became the place I longed to escape to. As the years went on I came back over and over again, almost addicted to this feeling of wonder and love. Desperate for more of these mountains who spoke so much to me of my Makers safe hand on my life.

They slowly grew, I became less the star they orbit around. They are able to not be with me constantly and I let myself hope that one day my two loves could meet. Last year I gingerly drove my roads and felt the pull of wonder again. I introduced one of them to the slopes, the lake and then held my breath. I uttered a quick hello to my hills again and promised to return. 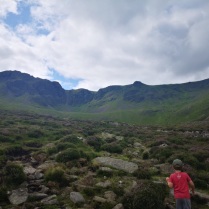 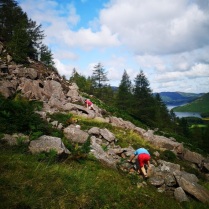 This year we lured the small ones up the mountain slopes, sugar helping their steps, a secret lake enticed them further up and I felt breezes of wonder hit their small brains. The sun shone and the luminous green hills lit up around us. We paddled in Bleaberry Tarn, in the shadow of Red Pike. We stumbled up and down mountain paths and ate ice cream. I felt the joy, I saw glimpses of it gripping them and let myself smile, holding loosely to the hope of them sharing my addiction to this place.

Buttermere will always be there for me, I know they must find their own loves, places and joys which sing the love song of their Maker to them. For now I rest content that the two deepest loves of my life can coexist, rest together and form new paths in the years to come.

My family met my first love.

This entry was posted in Life on the journey, Outdoor fun and tagged buttermere, children, fells, firstlove, joy, maker, mountains. Bookmark the permalink.