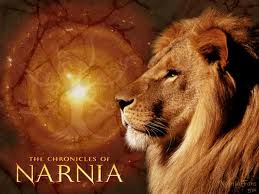 Whispers of hope are dawning in the darkness. Hints of a world beyond what we can see and taste and touch. The mysterious starts to be revealed and made known. The curtain twitches and slowly draws back.

A little bit like when the children learn of Aslan for the first time:

“Here the Beaver’s voice sank into silence and it gave one or two very mysterious nods. Then, signalling to the children to stand as close around it as they possibly could, so that their faces were actually tickled by its whiskers, it added in a low whisper –

‘They say Aslan is on the move — perhaps has already landed.’

And now a very curious thing happened. None of the children knew who Aslan was any more than you do; but the moment the Beaver had spoken these words everyone felt quite different. Perhaps it has sometimes happened to you in a dream that someone says something which you don’t understand but in the dream it feels as if it has some enormous meaning — either a terrifying one which turns the whole dream into a nightmare or else a lovely meaning too lovely to put into words, which makes the dream so beautiful that you remember it all your life and are always wishing you could get into that dream again. It was like that now. At the name of Aslan each one of the children felt something jump in its inside. Edmund felt a sensation of mysterious horror. Peter felt suddenly brave and adventurous. Susan felt as if some delicious smell or some delightful strain of music had just floated by her. And Lucy got the feeling you have when you wake up in the morning and realize that it is the beginning of the holidays or the beginning of summer.”

This entry was posted in Life on the journey and tagged Advent, aslan, hope. Bookmark the permalink.