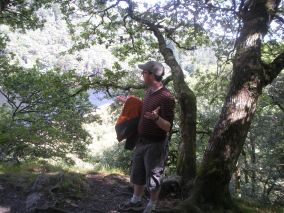 So, it’s September. The wind is howling outside and I’m slowly stepping back into this thing called routine. That means more delightful times sitting at this old Macbook (poor thing is getting slower as the world speeds up around it) tapping out some thoughts on life the universe and everything for anyone who wants to drop by.

It feels right to fill in the gaps, if only for a future self reading this thinking, what did happen between Camp and September?  I’m not going to pretend we had the most relaxing summer in the world. There is too much going on that is hard and difficult at the moment. But in amongst the difficult stuff we managed to enjoy a weekend in Dublin, found a leprechaun, climbed up a pretty hill, reenacted the life of St Kevin (see picture of husbandface trying to be as patient as St Kevin who apparently prayed for so long that birds made a nest in his hands…), drank lots of Guinness, ate some good food and generally enjoyed the slightly over priced world of Ireland’s capital.  We drove lots of miles in our little car, we decided that Holyhead would not be on our top 10 places to live and we found some places in Belfast that didn’t serve us grease. We celebrated our Nephews 1st Birthday and managed to extract some smiles out of him. We also watched many films, read books, enjoyed some new music and ploughed our way through too many episodes of The Big Bang Theory.

Fair Game– CIA agent’s life messed up at the beginning of the Iraq war, pretty decent take on the true story drama genre.

The Social Network: Well I say watched, I played angry birds all the way through, still don’t like the film, entirely subjective and  just comes across as misogynistic crap most of the time.

Stand by Me: It’s the 25th Anniversary this year, still a pretty faultless film, love knowing every line so well and the end credits still make me bawl my eyes out.

Super 8– First 45 minutes are an awesome fond look back at 80s films like the Goonies. The rest turns it into a bit of a tiresome misunderstood alien monster thing. Boo.

Juno– You know it, if you don’t – go and watch it now. Incredible soundtrack and uber cool.

Shawshank Redemption- We found the last person who has never seen this film, it was almost better watching her watch the film. Love this film for the quotes on hope, the Opera singer scene and Morgan Freeman’s voice for over 2 hours narrating. Bliss.

The Guard: This is very funny and far more intelligently entertaining than I was expecting.  Be warned it may have more impact if you’re Irish or have spent lots of time in Ireland recently..

Player 1- Douglas Coupland: Soon to come will be a blog post lamenting that no-one listens to Mr Coupland anymore and that’s a sad sad thing.  Pretty standard stuff from him but still we blindly carry on hiding from exploring the meaning of this world. Soon we’ve got to listen, right?

Keith Richards- Life: Great for the entire back catalogue of Rolling Stones songs that inhabited my head for days. Interesting de bunking of most of the myths around him but way too rambling about the drug enduced 70s. Worth it for the music stuff though, I liked him lots as a result of reading.

The Hare with the Amber Eyes- Edmund De-Bussey- Loved this tour through the Jews in Europe via Japan throughout the nineteenth and twentieth centuries. Fascinating stuff.

CD buying has slowed down lots since getting married- it’s that lack of disposable income, having to work out buying decisions together thing. But my birthday thankfully dropped some treats into my lap.

Paul Simon- So Beautiful or So What. Musically one of the most interesting albums I’ve heard in a long old time. Lovely lyrics, delightful melodies and very cool percussion stuff going on.

Bon Iver and Gillian Welch pretty much do similar things to me- beautiful vocals that wrap around the brain and soothe the soul.

The Rolling Stones- Stripped: I don’t care what you say, they were better than the Beatles, they had blues, they had soul, they had sexy tunes and dirty guitars. Stripped is a bluesy romp to prove the point and that they’ve still got it- as Keith points out in his book, no-one would care if they were black and this old and still going.

Adele- 21: In comparison to Paul Simon the music on this feels a little samey and predictable. But that’s probably not fair. Her voice is amazing, one day Binface and I are going to delight in playing Rolling in the Deep together and she’s got lots and lots of Soul going on.

And there you have it, a imperfect roundup of some summer weeks. On with the blogging I think…

This entry was posted in Life on the journey and tagged books, diary, films, Music, summer. Bookmark the permalink.